Also, in case you didn't catch it:

The most recent installment of Norsk Code, reproduced here for your convenience.
(I hope this isn't copyright infringment... but I'll also include the link to view it directly on Seacoast Media Group's own website, below)

Anne Worsøe is the head of New Business for Statkraft, Europe's largest renewable energy company. In our interview she talked about "The old folk songs about the true Norwegian - that was a guy who actually mastered the ocean. In the storms, he went out there, got his fish and came back to feed his family. He was a strong Viking personality, mastering the nature."Stephanie Haas photo
February 23, 2010 2:00 AM
It's Thursday, Feb. 18, at 12:09 p.m.
I am sitting in the Arne Naess Library at the University of Oslo's Center for Development and the Environment (SUM) trying to garner some inspiration while surrounded by Naess's literary collection. Naess was a prolific biographer of Gandhi, expert hiker, natural philosopher and national hero. His colleagues remember him as a man who never owned a car and climbed up the side of the two-story SUM building to enter his office through the window just for fun. Naess also founded the "Deep Ecology" movement. The philosophy emphasizes nature's inherent value and our ethical imperative to value quality of life over economic success.
Why should you care about who Arne Naess was? Perhaps because his son, Arne Naess Jr., was once married to Diana Ross and fathered two of her children? Probably not. Naess's philosophy may well come to influence your life in some very profound ways as the call for global change rings too loud to ignore.
Policy makers and grass-roots organizations alike recognize the urgency of the climate change situation. It is only a matter of time before radical ideas, like the ones espoused by a crazy old mountain-climbing Norwegian philosopher, will infiltrate all of our lives.
I gaze out the window, which the aged philosopher purportedly breached with pick and rope in hand, at the blowing snow and gray sky. Winter has settled its frigid claws into our sides, sending shivers through our tired bodies.
The weather may well be the same here as it is at home, but this annual immersion into survival mode has deleted my memory of previous years. If I were wise enough to follow the Norwegian example, I would have tried cross-country skiing by now. The wintertime activity raises endorphin levels and gets one outside enjoying the snow.
Tall, lean Norwegians, clad in the finest sporting attire — an image of athleticism — stand proudly holding their thin skis riding on the subway up to the track around Sognsvann Lake.
Cross-country skiers are everywhere. Yesterday, I saw several students leaving the local high school on skis. I was on my way to the Norwegian Technical Museum to check out their permanent exhibit on the Norwegian oil industry. All of the text in the exhibit is in Norwegian, which seems a bit strange since other permanent exhibits (like another on music) also include an English translation.
Apparently cross-cultural accessibility is more important in learning about the first recording of Aha's "Take On Me" than the history of the oil industry in the third largest oil exporting country.
Right now you might be thinking, "Arne Naess? Cross-country skiing? Aha? Where is she going with this article?" Allow me to clarify. This meandering style also has some significance within the context of this Norwegian experience.
Last Thursday I attended a seminar held at the Ministry of Foreign Affairs where all the Fulbrighters from Norway got together and presented their projects. It was a truly multidisciplinary day, with topics from food to pollution to peace. Those following a more pedagogical track here in Norway shared accounts about their teaching experience.
One point that they all agreed on is that there is a trend in Norwegian writing, especially at the pre-university levels, that involves "exploring all sides of a topic, but not really making arguments or conclusions about that topic. Students in Norwegian schools, even through the University level, will write essays detailing their 'thoughts and feelings,' while in U.S. academia, frankly, no one cares about your 'feelings,'" says Julia Edwards, English teaching Fulbrighter from Maine.
"It is, therefore, a challenge to teach university students how to form an argument or thesis statement that they have to fight for, prove and support with evidence because that is just not the way the Norwegian education system teaches writing."
After the seminar we all got together for a ski weekend near Lillehammer. It was exciting, to say the least. Near-death experiences included. It was also productive, as I completed three interviews, including one with Lars, the lift operator. As the sun dropped below the glacier-ripped horizon, we rode the ski lift backwards down the steep mountain, feet dangling high above the slanted trees.
Photographer Stephanie Haas of Stratham is in Norway for one year on a Fulbright Scholarship.
Posted by Unknown at 7:37 AM 3 comments:

Yes! I am still alive!

Greeting my poor, neglected readers. Please know that I haven't forgotten about you - on the contrary, in fact! I have simply been so busy accruing new and wonderful experiences that it has been impossible to write here.

You will, I hope, forgive the slightly hyperbolical language. Things have more or less fallen into a harried routine here in Olso. With the cold biting through my skin and every bone, it is all one can do to keep moving - trudging through snow drifts and ice patches - on to the next task, as mundane as it may seem. Old man winter finally got the best of me the last week, scratching my throat to a dry, bloody-red mess complete with uncontrollable coughing fits. Itches came from deep in my lungs and are unsatisfied even with the most violent of convulsions. Finally, I'm feeling healthier again, with the more familiar excess of slimy mucous coating the wounds in my pharynx.
On a brighter (and hopefully less graphic) note: My friend from England came to visit last weekend. We journeyed out over the frozen crusts of Sognsvann lake, testing our courage over the slushy parts of ice and trudging through almost three feet of snow. 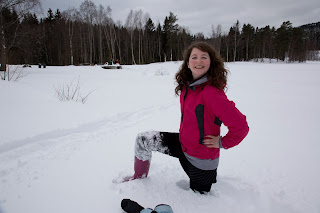 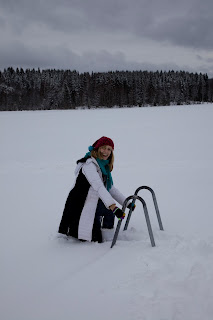 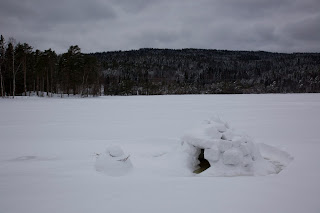 Working backwards chronologically, the previous Thursday aforementioned German hunk was kidnapped before his birthday. After we rescued him from his captors, we took him to a concert. Reports of the kidnapping are vague and mysterious. Some say a terrorist plot was involved. Others claim it was all a figment of the birthday boy's imagination. Photographic evidence is, as of yet, unavailable, but investigators are on the case.
The Fulbright ski weekend and Viking party... photos can say more than words in this case, I feel. 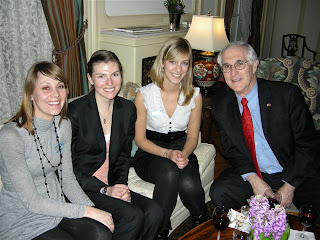 Heather, Alex and me with Barry White, US Ambassador to Norway at his house!! 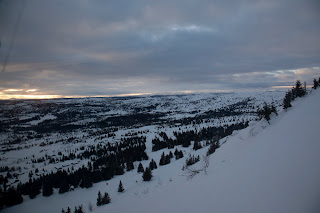 I skied down this slope. Almost fell of the edge of the mountain when distracted by the devastatingly gorgeous scenery. 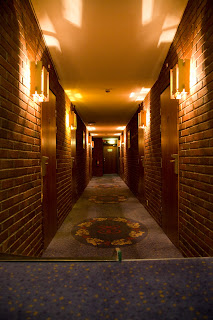 The hallway next to our room at the hotel looked like something out of the Shining. Meant to photograph one of the hotel staff there, but I'm sure I could not have done Kubrick justice. 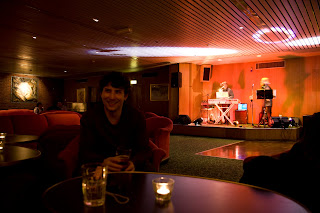 We were entertained by a 2 man Bulgarian cover band in the empty basement bar at the hotel on Saturday night. Their set list was vast and extensive, ranging from New York, New York to I Kissed a Girl to the most obscure Madonna song any of us had ever heard. 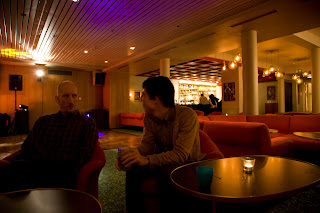 The decor was very 70s with a retro mod twist. 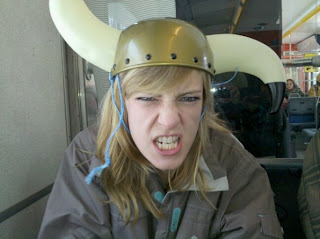 Prep for viking party: I wore my helmet everywhere 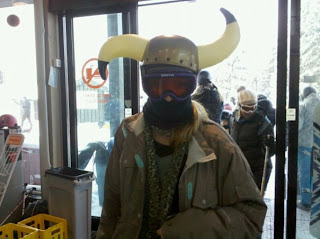 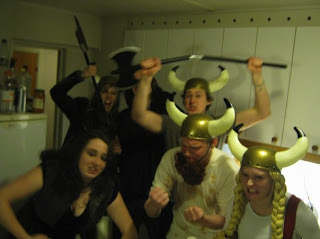 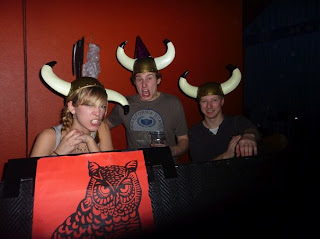 I got to DJ for an hour. Don't think I'll be doing that again any time soon. The thinly veiled, boiling rage is real this time.
While on the ski weekend, I completed a few interviews. Since then, I have been running a bit behind schedule, but I expect the project to pick up rapidly after the first week of April when my term paper and final for another class are due. I am waiting for the spring weather and that age-old familiar call "west! west! west!" to lure me to the opposite shores for some captivating consultations with whalers and oil (wo)men.
Posted by Unknown at 7:32 AM No comments: