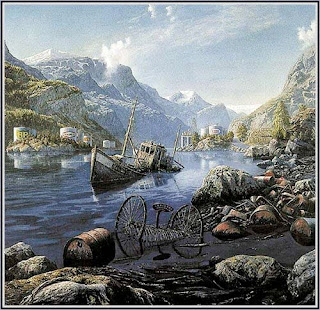 His use of comedy toward and environmentalist end is rare from an international perspective, and almost unprecedented in Norwegian art. There have been several influential illustrators from Norway and Scandinavia (the Muhammed cartoons scandal a few years ago put Denmark on the map for political cartooning), but it is a rare case when their satire deals with environmental issues. Groven's paintings of exaggerated destruction thereby command the viewer's attention, not only thanks to their skillful rendering but also the originality of the subject matter.
Posted by Unknown at 11:27 AM 13 comments:

Norsk Code: Once upon a time in the West

The latest edition of Norsk Code: published in the Exeter Newsletter 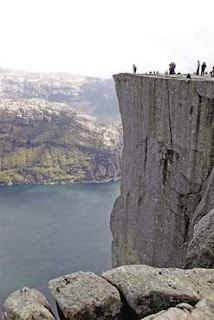 Legs dangling over the 1,982-foot precipice above Lysefjorden; this is where one gets a sense of Norway’s indescribably sublime natural landscape. 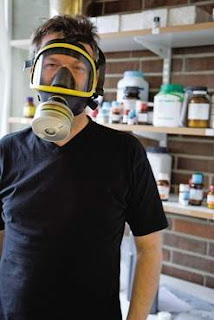 When you walk into a lab and someone is wearing a mask like this, suddenly it's the most stylish accessory you've ever seen. Roald Kommedal is a professor at the University of Stavanger who works primarily with biofilms - any accumulation of microorganisms that adhere to a surface. The topic of our interview became even more relevant the next day as I treaded cautiously over steep and slimy rocks up to Preikestolen.
Stavanger: Norway's oil city. It is arguably the most international of all Norwegian cities and it's the heart of the country's booming economy.

I visited Stavanger for the first time a few weeks ago. My parents and boyfriend would join for the half-work, half-play weekend away. We only got a sporadic night's sleep aboard the overnight train from Oslo to Stavanger as the cabin lights gleamed down on us and our unlucky seats did not recline.

Once in Stavanger, we ambled sleepily up the hill from the train station among quaint, old whitewashed houses teetering awkwardly on steep, San-Francisco-style streets. The edifices seemed out of place when juxtaposed against the enormous, glass encrusted, modern architectural triumphs that lined the city center. In a city with a population of only 120,000, perhaps it's actually those corporate colossuses that should be ogled as black sheep.

All day Friday it rained, which is generally considered to be the natural meteorological state of Stavanger. That was just fine with me as I had a lot of work to do that day. I completed four interviews with portraits. I even had time to visit Sjokoladepiken, a well-known gourmet chocolate shop on Stavanger's most colorful street — Øvre Holmegate.

We spent the next morning lazily enjoying a typical Norwegian breakfast of cold meats on bread, including smoked salmon or liver pâté for the strong-willed. They also served us a modest portion of more familiar fare — bacon and eggs. The American influence is strong in Stavanger and manifests itself in strange ways. There is a greening copper sculpture dedicated by the American oil companies to Norwegian emigrants to the USA. The statue depicts a hoofed animal writhing awkwardly in space, its neck pulled back and turned, legs stretching in unnatural directions. The gesture is actually what you might expect to see if you dropped an antelope into an enormous vat of petroleum. Hmm.

My faithful companion and I were determined to hike up to the world-renowned Pulpit Rock — featured in most photographic brochures boasting Norway's sublime landscape. My parents are not the type to be wooed into a perilous climb up steep, wet rocks and along mountain cliffs. They decided to stay in town. We made plans to meet for dinner at 19:00.

To get to the base of the trail to Preikestolen, one must travel more than an hour by ferry and bus. We were setting out late, and the bus driver warned us twice that we should take care to not miss the last bus, which would depart at 19:15. As we got off the bus at 14:45, I asked the driver what time the soonest bus would leave. He laughed and told me we would never make it for 17:15. I told him I had a date for dinner at 19:00. He said, "Cancel it. It's impossible." That word "impossible" rang in my ears like an antelope's gallop to a pursuing lion.

We had two hours and 45 minutes to complete what fearless, athletic, outdoorsy Norwegians deem a solid four-hour round-trip trek. My boyfriend and I might not be the fittest people in the world, but by God we were the most determined that day. We passed everyone, dodging toddlers and making up inspirational fantasies about being pursued by horribly singing Russians. We pushed on at full speed, even as our legs began to ache and our throats got dry. We made it to the top in one hour and 15 minutes. We must have broken a record. Gloating, we took some pictures and rapidly munched a candy bar appropriately named "Kvikk Lunsj" (pronounced "quick lunch"). After a 15-minute pause we were back on our feet again, literally running down the rocks to make that bus. There was no problem overtaking any of the hikers on the way down — gravity was on our side. Suddenly, we came up behind a group of gray-haired Norwegian women, picking their way down some wobbling wet rocks. We came up behind them and started to pass, but each time we started to speed around, they seemed to dash ahead with superhuman speed. Laughing and talking as they went, those women were nimble as mountain goats. We huffed and puffed, and finally managed to overtake them. As the path in front of me started spinning due to exhaustion and hunger, I pushed on. The thought of that bus driver's face, twisted in shock and awe, drove me forward.

In the end, the glory was ours. We made it back in time for Indian food with my folks. For any readers whom I've convinced to visit Norway, do check out Stavanger and Preikestolen — and take time to eat the Kvikk Lunsj!
Posted by Unknown at 4:52 AM 3 comments: