November - In a nutshell

The project is coming along well - slowly but surely. I have decided to also focus on getting representation from the corporate sector. As my thesis concept develops in my mind, I realize the significance of getting a broad sample of Norwegian participants. To analyze the cultural connection between Norwegians and their ideology about nature and the environment, I will need to speak with many different Norwegians.

This weekend I will travel to the Lofoten archipelago with a group of friends in hopes of seeing the northern lights, the world's largest maelstrom, and, of course, to meet with some of the locals. I hope I will meet some people with 20 minutes to spare for a photo and interview session. As I may have said before, I have found Norwegians to be surprisingly receptive to random approaches. I had quite a bit of luck with this technique at a Bodens Marked (farmers market) this fall. 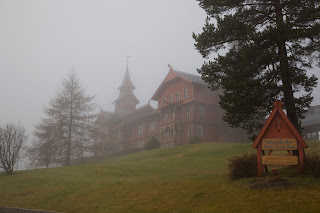 Last Wednesday I attended a workshop about CDM - Clean Development Mechanism. The presentations were enlightening, providing many facts about Carbon Emission Reductions (CERs) and how they cohere with the various stipulations of the Kyoto protocol. One presentation posed the question of whether or not REDD programs - those dedicated to reforestation or the halt of deforestation - should be classified as CDM projects. If that were the case, the Norwegian government would probably already have surpassed their Kyoto responsibilities due to the 5 billion NOK in foreign aid and relief funds they invest in rainforest protection every year.
A Parliamentary Advisor from the Finance Department reported that 85% of the CDM projects Norway has invested in are small projects. He explained that it is difficult to find larger projects that meet the UNFCCC criteria and also generate enough CERs to make it worth their while.
There was some disagreement among presenters about the actual percentage of Norwegian electricity that is produced from hydro power (vannkraftprosjekter). Most news sources and the website for Statkraft (the Norwegian government-owned power company) claim that 99% of Norwegian electricity is generated by hydro plants. The presenters at the workshop seemed to think it was less than this, also mentioning that Norway exports some of its hydro power to other countries.

Near the end of the workshop an interesting question was posed by Arild Angelsen of the Norwegian University of Life Sciences in Ås:
"Why are we more concerned with where our carbon credits are coming from than our coffee or cocoa or other goods we purchase from the tropics?"
He was responding to the concern that a disproportionate number of CDM projects are taking place in China.

My main concern when listening to the presentations is whether enough money is being spent on developing newer, more efficient renewable technologies so that we are not spending a lot to quickly reduce our carbon debt (per Kyoto) but ignoring the quality factor. The CDM model is interesting in theory, as it forces industrialized countries to help undeveloped nations establish more ecologically sound energy sources while their energy demands grow. I am skeptical about whether this is being embraced aggressively enough to slow the consistently steep increase in worldwide atmospheric CO2 concentration.

Frederic Hauge of Bellona, a Norwegian NGO I met with last Thursday, is a strong supporter of Carbon Capture and Storage technology. He looks forward to developments in CCS technologies which may work to sequester CO2 in biofuel power plants, thus potentially using the stored energy and forcing it back into the carbon cycle.